The statue, the oak tree and the ox...

Dedicated to “Our Lady of Beauchêne, Help of Christians”, this shrine is particularly ancient, having existed for over eight centuries. 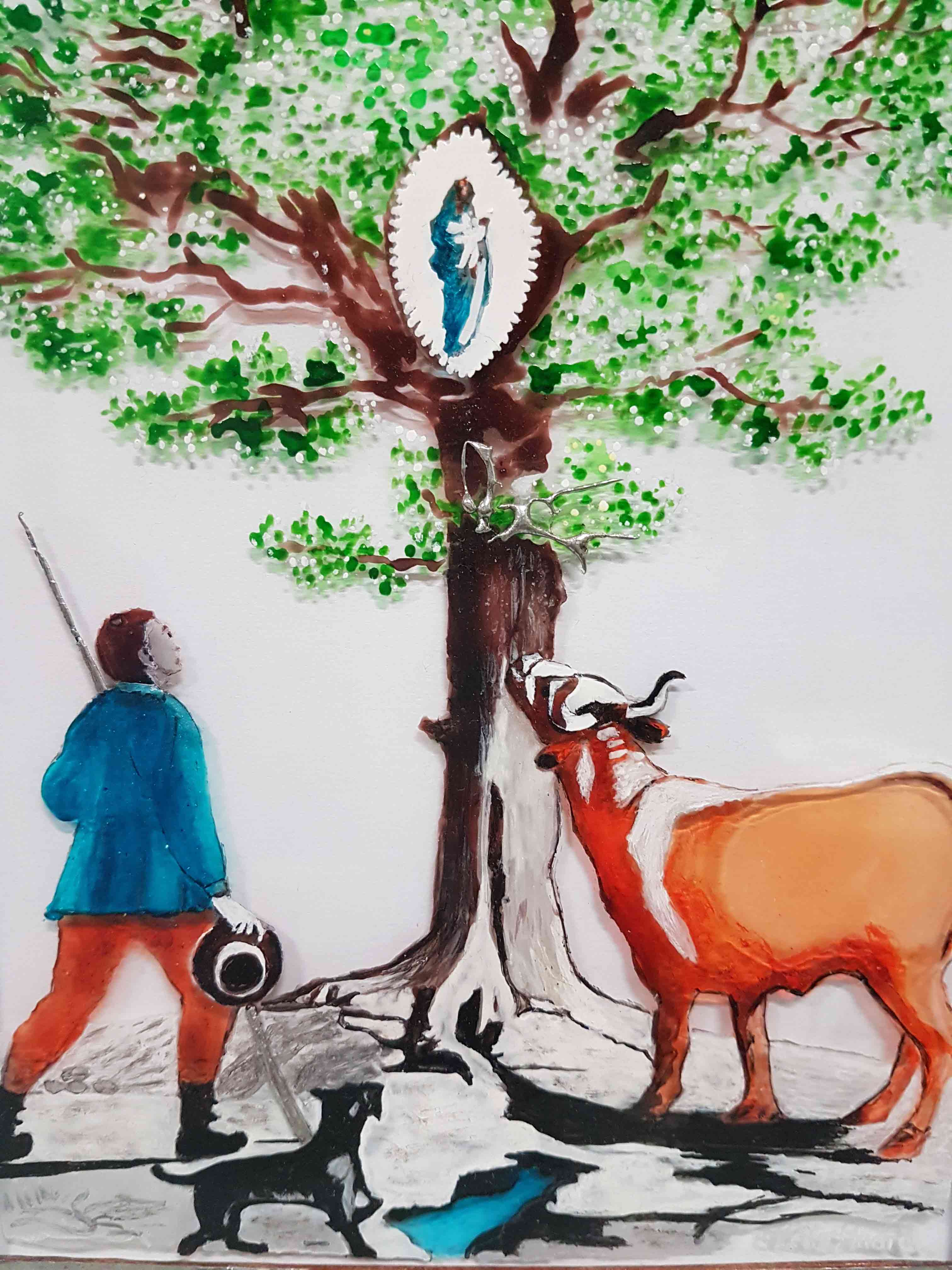 According to tradition, a herdsman, seeing that a fattened ox in his herd would not move away from an old oak, discovered a wooden statue of a Virgin and Child there.

Had it been placed in the hollow of this tree at the end of the 9th century by the local inhabitants fleeing the Norman invasions? Or by the monks of Saint-Jouin-de-Marne Abbey who came to evangelise the region?

The Lord of Puyguyon had a humble chapel built on the site to house this precious statue.

In his will, Pierre of Puyguyon, executing the will of his father Jacques, donated on 27th December 1373 a sum of money for the renovation of the chapel and a bolster (cushion) recently brought back from the Crusades and reputed to have belonged to the Holy Family.

This cushion, as well as the statue of the Virgin and the bell, would be destroyed in a fire lit by Protestants in 1562 during the Wars of Religion.

We know through Gauthier de Bruges, the saintly bishop of Poitiers and a contemporary, that the Beauchêne chapel already existed in the year 1300.

With its square form replacing the elongated rectangles of ancient basilicas, the edifice is typical of the architectural renewal of the 11th century. The facade featuring triangular pediments and a semi-circular arched window, the square “Lombard” bell-tower with its Roman acoustic shutters, the ornamental brackets under the cornices of the bell-tower and roof, and the buttresses all indicate that the construction dates from the 12th century.

Before the opening was made for the main door, at the beginning of the 13th century, the altar was not in its current position, but against the wall beneath the large stained-glass window, near the statue of the Blessed Virgin Mary.

The Gothic transformations from the 13th to the 15th centuries 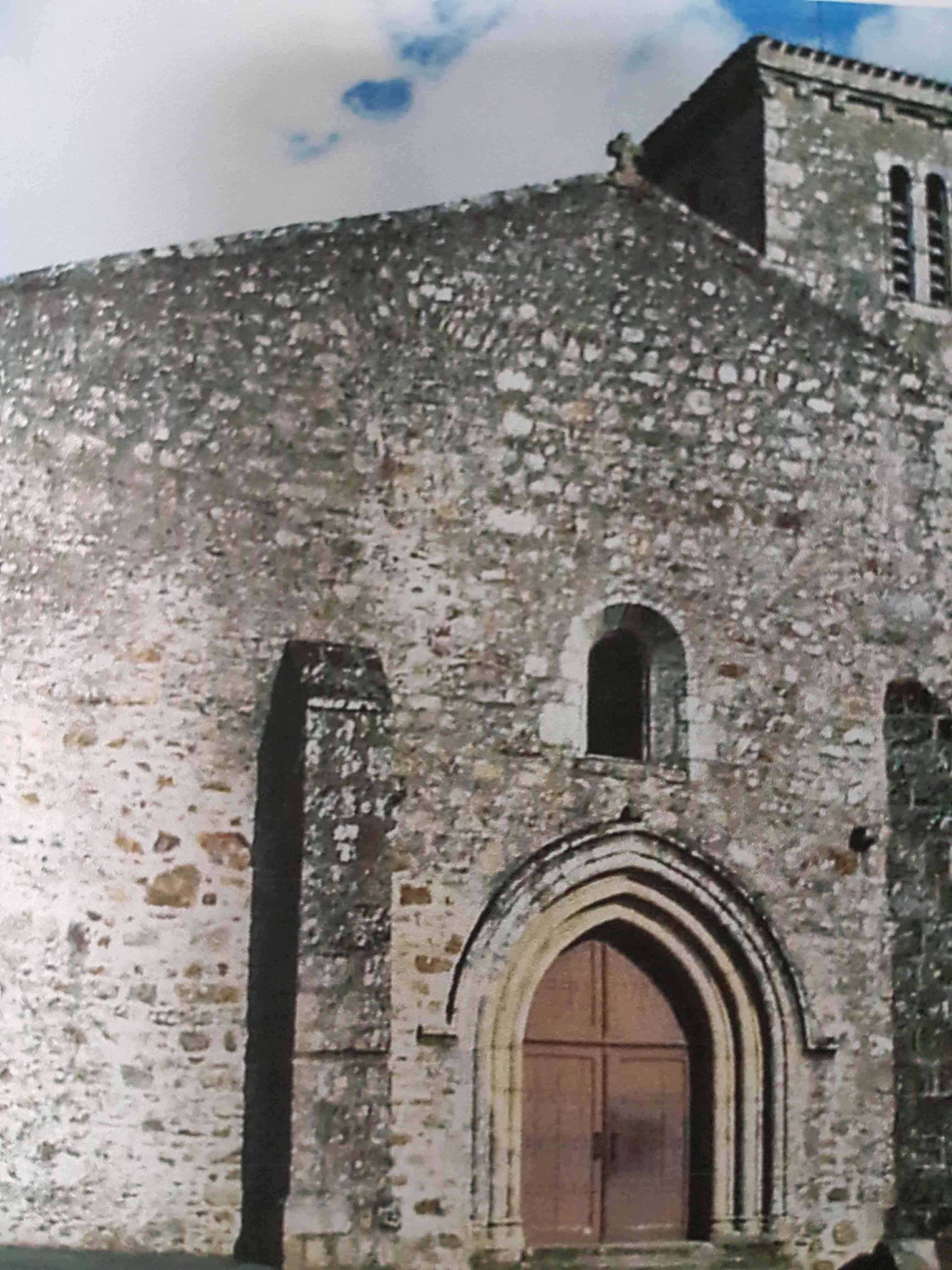 With its wide and low ogival arch, its simple ribs and the keystones of its vaults, the entire vaulted ceiling, as well as the two pillars nearest the large doorway with their mono-cylindrical columns (similar to those in the chancel of Notre Dame Cathedral in Paris), can be dated back to the first half of the 13th century.

The main door and that of the bell-tower are also earlier than 1250.

At the end of the 14th century, the two pillars at the entrance to the chancel, as well as some of the columns embedded in the walls, were replaced by a series of small columns rising to capitals.

In the 15th century, two windows were opened up, one behind the main altar and the other to the right of the altar of the Virgin Mary, and on the outside, the turret with the bell-tower’s staircase was built. 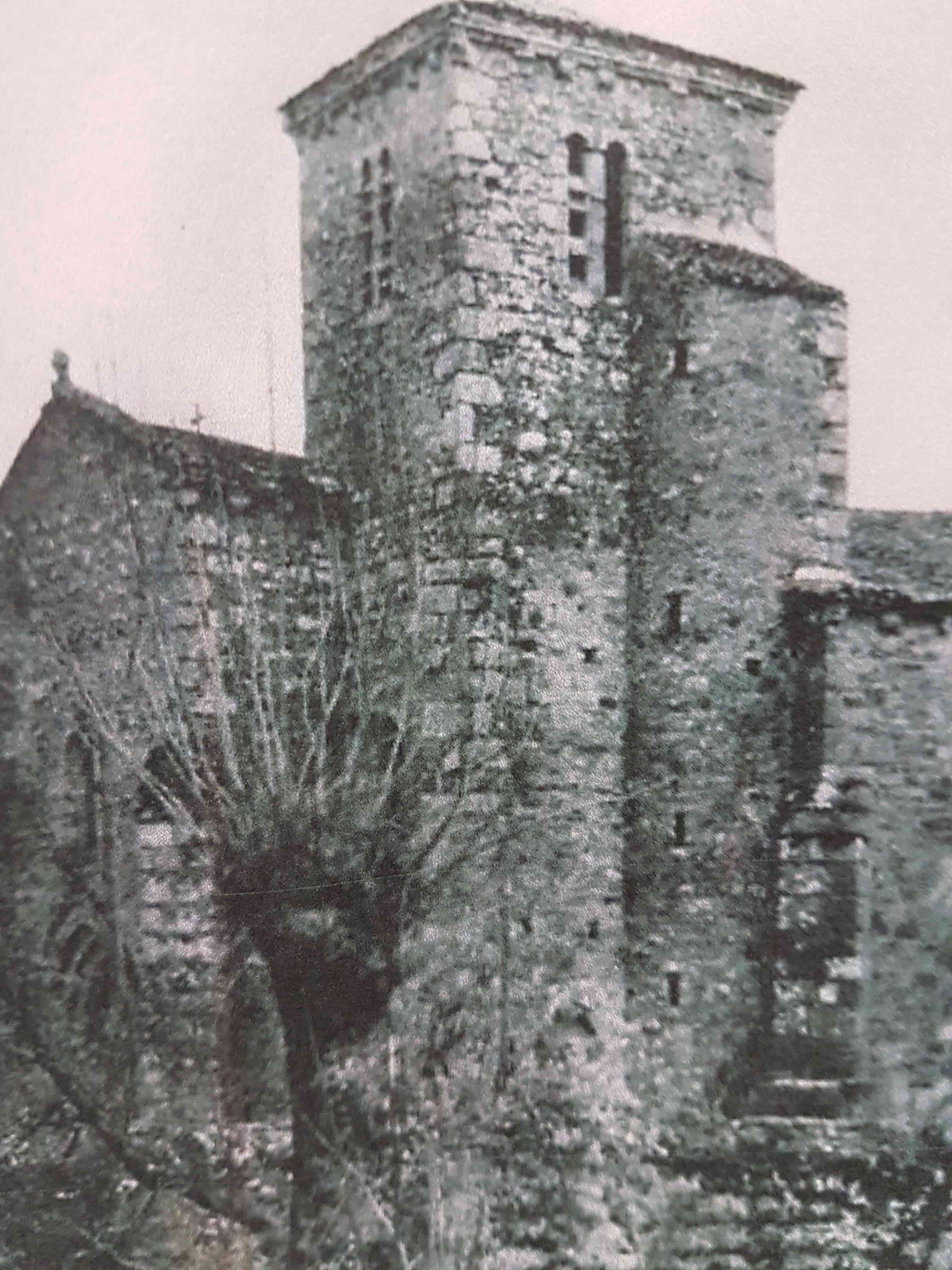 After the Protestant plundering, a second statue of the Virgin Mary in the 17th century 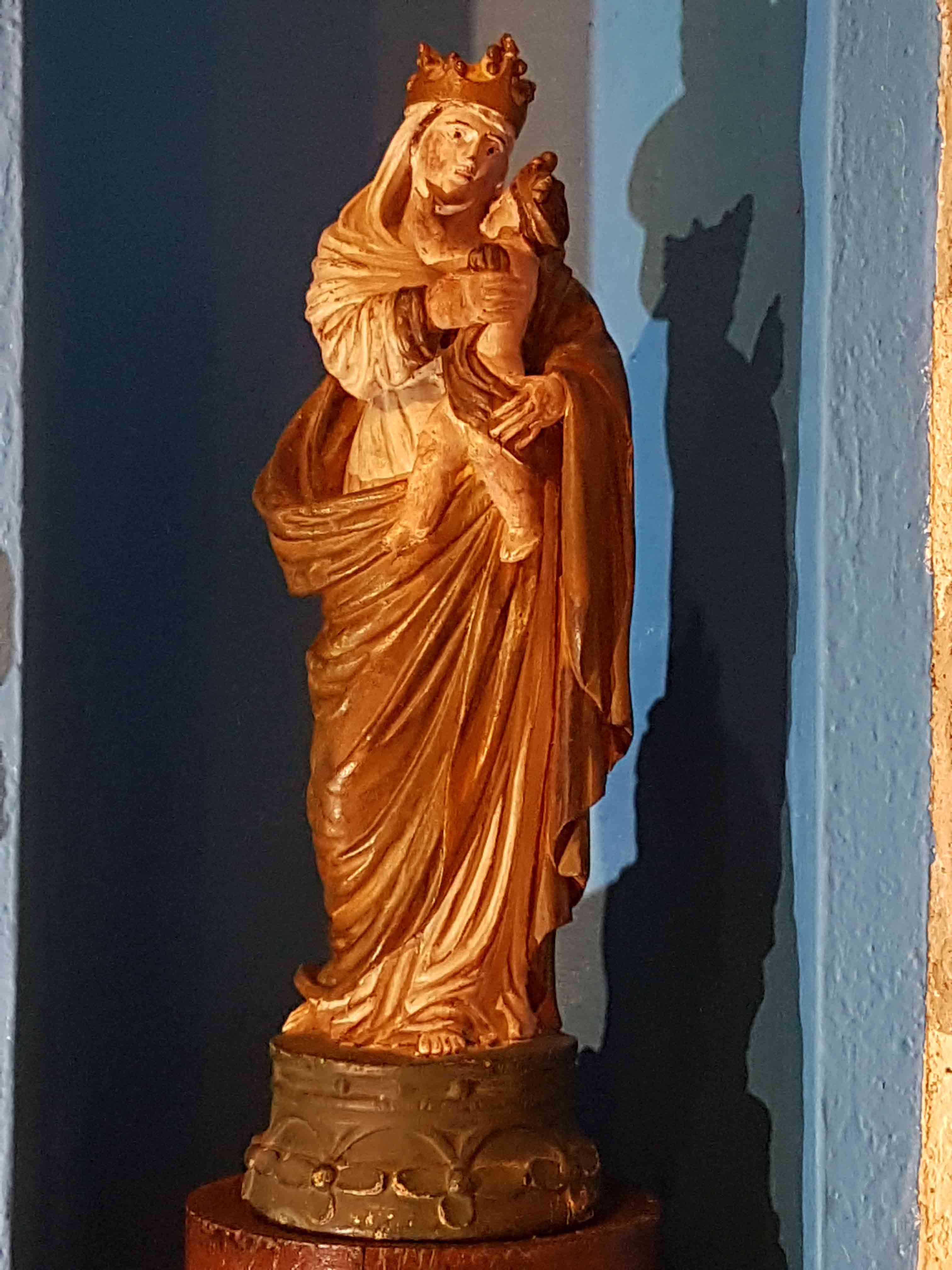 After the destruction of the original statue of the Virgin Mary by the Protestants in 1562, a new statue was sculpted in the 17th century, in wood taken from the original oak tree which had been preserved out of devotion. It is currently kept in the monastery and a copy of it, also in wood, is displayed in the chapel.

In the 18th century, we know that the chapel drew a large number of the faithful, whose oblations paid for its maintenance and decorating. But no priest had been established there for the Holy Sacrifice of the Mass, with sufficient income and lodging.

Jeanne Françoise de Surgères, the widow of the Marquess de La Flocellière, and Henriette Elisabeth de Granges de Surgères, Lady of Puguyon and the widow of Alphonse de Lescure, remedied this with their foundation established in 1755 before a notary, “doing this with no view to gaining human respect, but moved only by devotion towards the Blessed Virgin Mary, and in thanksgiving for help received through invocations made in the afore-mentioned chapel”.

It is said that General de Marigny came to pray in Beauchêne with 600 soldiers from the Vendée, and that he victoriously confronted the Republican Army about 100 metres from the shrine, in a hamlet called Bel-Air.

General de Lescure was himself the grand-son of the generous donor of the shrine.

The chapel was profaned in October 1793 by the revolutionary General Chalbos, who had come from Fontenay-le-Comte. The inhabitants carefully sheltered in their homes the statue of the Virgin Mary and other sacred objects, which were thus spared from the fires of the incendiary divisions led by Grignon and Lachenay on 25th January 1794, and ended up enthroning the Virgin in the church in Cerizay.

Tradition has it that, the very next day, the statue was found back in its own chapel in Beauchêne.

The same thing happened several times. Once, however, the statue was reported to have stopped on the way, in a field known as “the field of the image”, in a chestnut tree, bark fragments of which were preserved for a long time in the abbey and exhibited to pilgrims.

The statue was thus definitively left in its special shrine. 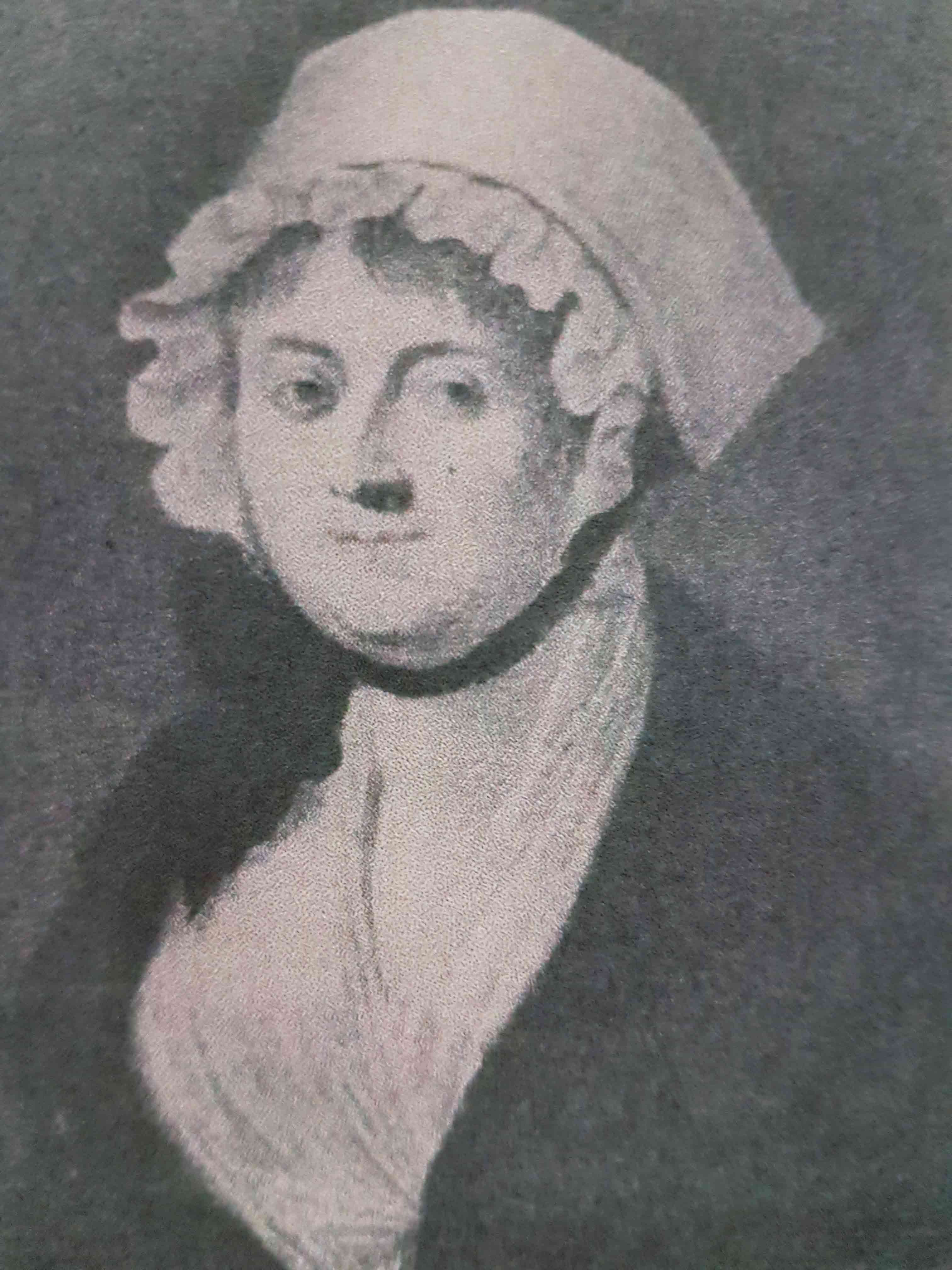 By marrying “Monsieur Henri” after the death of her first husband, the Marchioness de Lescure, who was already the Marchioness de La Rochejaquelein and a well-known chronicler of the Vendée Wars, became the proprietor and protector of the Beauchêne chapel until it was seized as national property in 1796 and sold in 1798.

The pilgrimages multiplied after the Revolution, while the building required new and urgent repairs and the Masses linked to its foundation were celebrated by the parish priests of Cerizay, as it had no chaplain of its own.

In her will of 1857, Madam de La Rochejaquelein instructed her grand-son, the monarchist representative for the Deux-Sèvres Department, to donate the chapel to the diocese of Poitiers, which he did in 1860 under Bishop Pius. 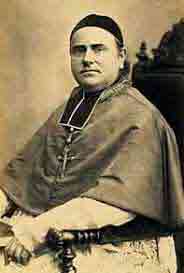 An array of miraculous healings

There were a great number of healings, some recorded in a work by Dom Bonneau in 1893.

One particular case, among the complete healings (limb malformations…), was that of Louise Henriette Fullizeau, from Antigny, in religion Sister Marie-Madeleine, a lay Sister. She was sent to the foundation in Cerizay in 1861 to make her profession, but fell seriously ill with an incurable disease despite medical treatment for eighteen months. 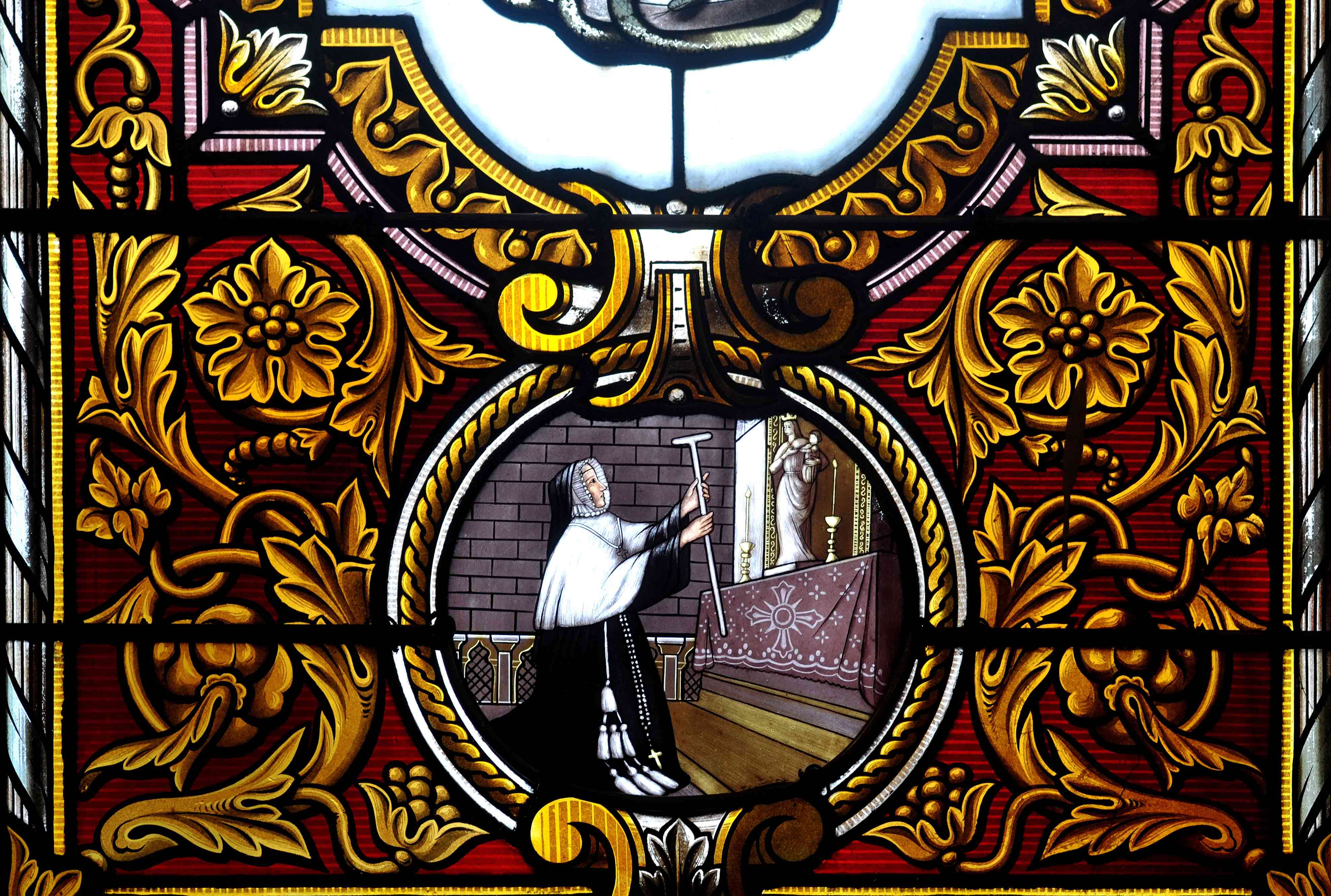 After a second novena to Our Lady of Beauchêne, she was healed suddenly just before Christmas 1864, floating around in her clothes, which had become all of a sudden too loose on her, and walking and running without crutches.

The arrival of the Canons Regular of Saint Augustine

Around 1865, two women religious belonging to the La Rochejaquelein family, but also Canonesses of Saint Augustine, had a large sum of money passed to Bishop Pius, of Poitiers, in order to have a monastery built in Beauchêne for male religious who would be entrusted with the care of ministering at the shrine.

Thus, while in Rome in 1867 preparing his participation in the First Vatican Council, Bishop Pius saw to this by appealing to the Canons Regular of Saint Augustine from the Congregation of the Most Holy Saviour of the Lateran.

The chapel established as an abbey church by Pope Pius IX, and the Portiuncula indulgence granted by Pope Leo XIII

The monastery was established as an abbey by Pope Pius IX in 1873, giving rise to a ceremony on 1st August 1878.

It was on 29th September 1872 that they officially installed themselves in the monastery which was not yet fully finished. Not being able to live there, the religious were accommodated for several months at La Tremblaye Castle, in the parish of Pin.

Pope Leo XIII granted the shrine the most important plenary indulgence for seven years starting from 1892: that of the distinguished Portiuncula which Saint Francis of Assisi obtained in 1216 from Pope Honorius III for every pilgrim who would enter his church in San Damiano and which the faithful can gain between midday on 1st August and midnight on 2nd August by going to the Beauchêne shrine to pray for the Holy Father’s intentions.

From the expulsion of the Canons at the time of the laws separating Church and State in 1880 up to the administrative autonomy of the Congregation in 1992.

The anti-religious laws of 1880, voted by the Freemason governments of the Third Republic, were quickly going to disturb the fledgling foundation by forbidding religious to live in community: the abbey was closed and sealed, and the Canons expulsed. Several of them found refuge in Deffend Castle (in Montravers) and Louisière Castle (in Cerizay). Four thousand faithful came to pray and protest against such measures on 7th November 1880. 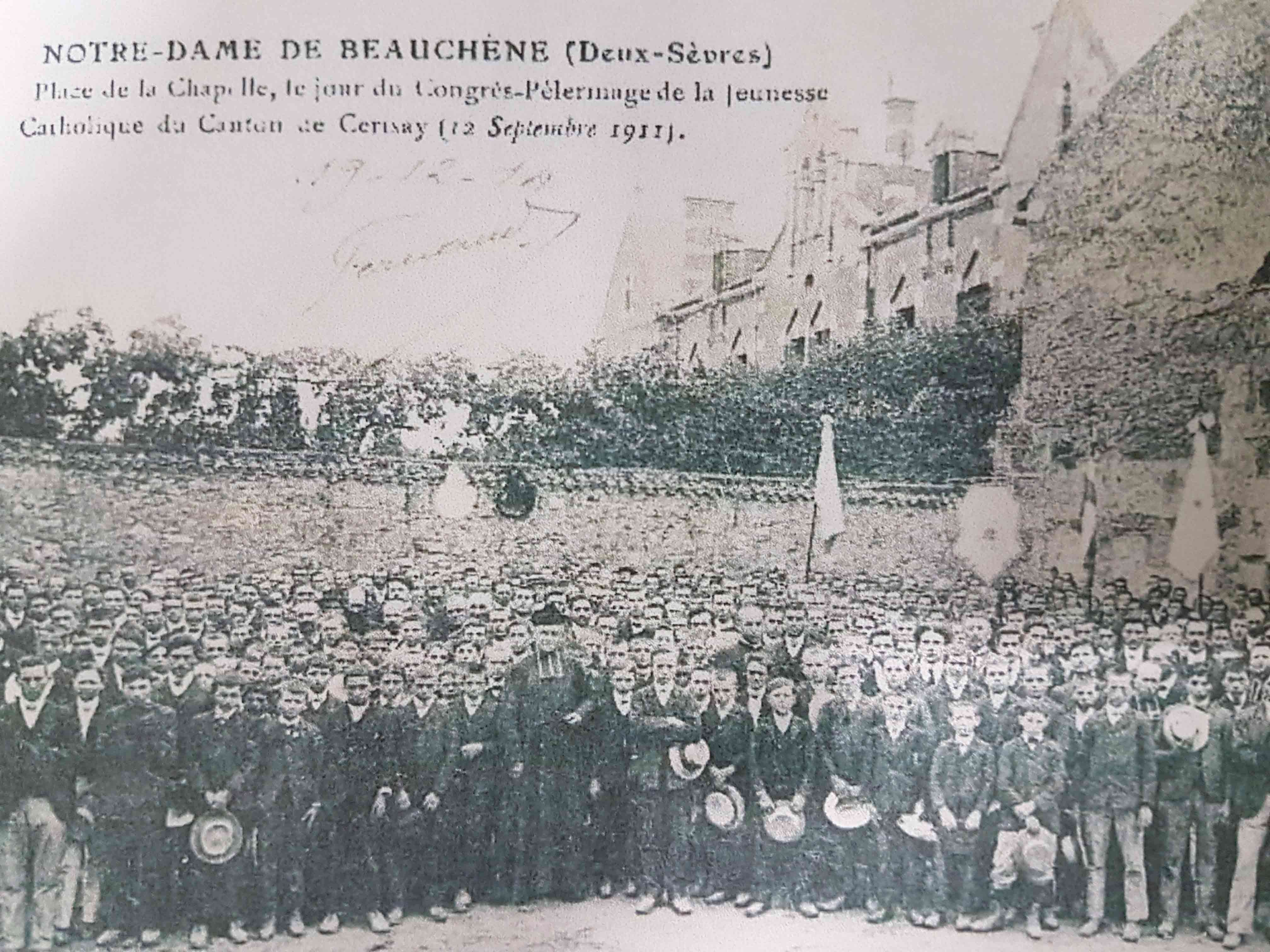 The monastery was put up for sale in 1885, and the dissolution of the Congregation followed in 1903. The same Julien de La Rochejaquelein, who had given the chapel to the diocese in 1860 when he had bought it under a pseudonym as national property, bought the buildings again, while Miss Berthe and Count Charles Beauregard purchased the furnishings and a part of the land which had been once more unjustly put up for auction by the State.

During the First World War, the monastery was transformed into a field hospital. In 1919, the ban on celebrating Mass there was officially lifted and, in 1920, the community was formed again. The owners then placed the chapel and monastery at the service of the religious.

A real-estate investment company was created in 1954 by Henri de Beauregard (of Deffend) and Michel de Beauregard (of Clisson), before the Congregation was granted the capacity to administer its assets in 1992.

In 1955, the Beauchêne statue of the Virgin Mary was officially crowned “Queen of the Landscape”.

Top
Our website uses cookies to offer you a pleasant and functional navigation but also for audience measurement purposes. Click on "learn more" to obtain more information about the cookies we use and their purpose.Allow.Learn more.